Automated testing is one of the most important things that a software company needs in order to be successful. Properly tested code operates in a consistent and dependable manner which generates customer trust. A software system with no tests, or tests that aren’t thorough enough, will suffer from outages and regressions that disappoint customers.

Although best practices for testing a monolithic application have been fairly well established there are still challenges that arise when testing a distributed system such as a microservices architecture. Developers have to ensure that components have consistent internal behavior, while also ensuring that each individual component will integrate properly with other components. Distributed systems require additional tests for failure conditions such as networking errors that prevent one component from communicating with another component. For some distributed systems the overall size of the system makes it hard to run a full end to end test so developers need strategies that allow them to test portions of the overall architecture independently while still ensuring interoperability.

This article introduces some of the fundamentals concepts for creating thorough test coverage for distributed systems, and discusses how to build a testing mindset into the development process to ensure testing concepts are employed effectively.

In order to build a thorough test framework we need to start with the concept of the “test pyramid.” This concept was developed by Mike Cohn at a time when most software testing was done using manipulation of the software’s interface. Quality assurance engineers would manually interact with the software UI, or write automated macros that interacted with the UI. This type of testing often failed to detect underlying issues in the code. In this context the concept of the test pyramid was important because it popularized the idea that such UI tests should be just the tip of a pyramid of different layers of tests.

The goal of having multiple layers of tests is to catch different types of issues. Each type of test focuses on a different layer of the overall software system, and verifies behavior within that scope. For a distributed system with a client and backend the tests can be organized into the following layers: 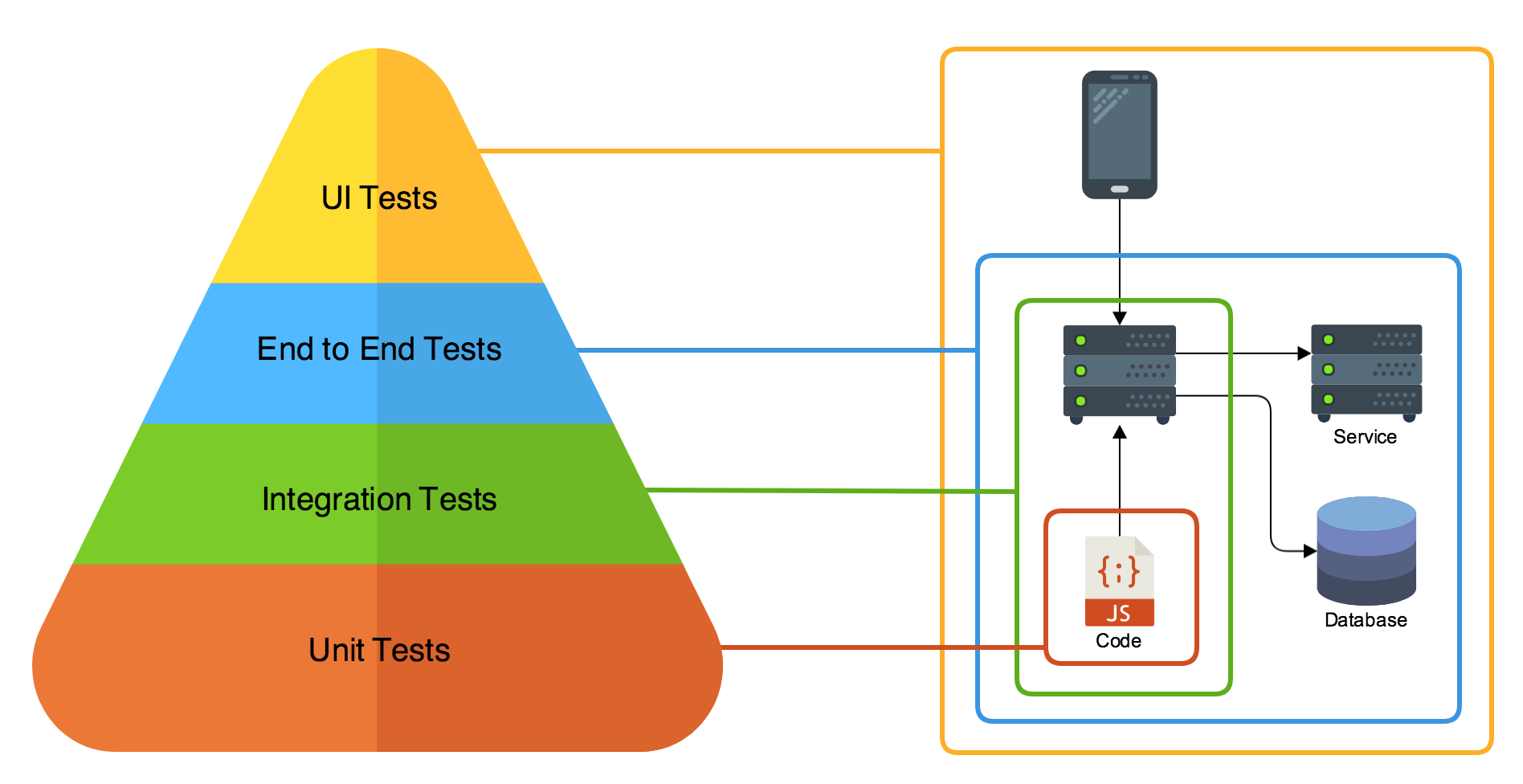 Tests that verify the behavior of class methods or functions inside a service. These tests take a code file from the service’s codebase, and execute its functions or class methods using different inputs, while verifying the output of the functions for each input.

Tests that verify the behavior of multiple services that communicate with each other. These tests are accomplished by running multiple services in an isolated environment where they can actually communicate with each other. End to end tests initiate a network request to a service, such as a REST API, then verify that other dependent backend services have updated in response to the input to the first service.

Each layer of tests, starting from unit tests and progressing to UI tests, builds upon the last layer to test the system at a higher level of abstraction: 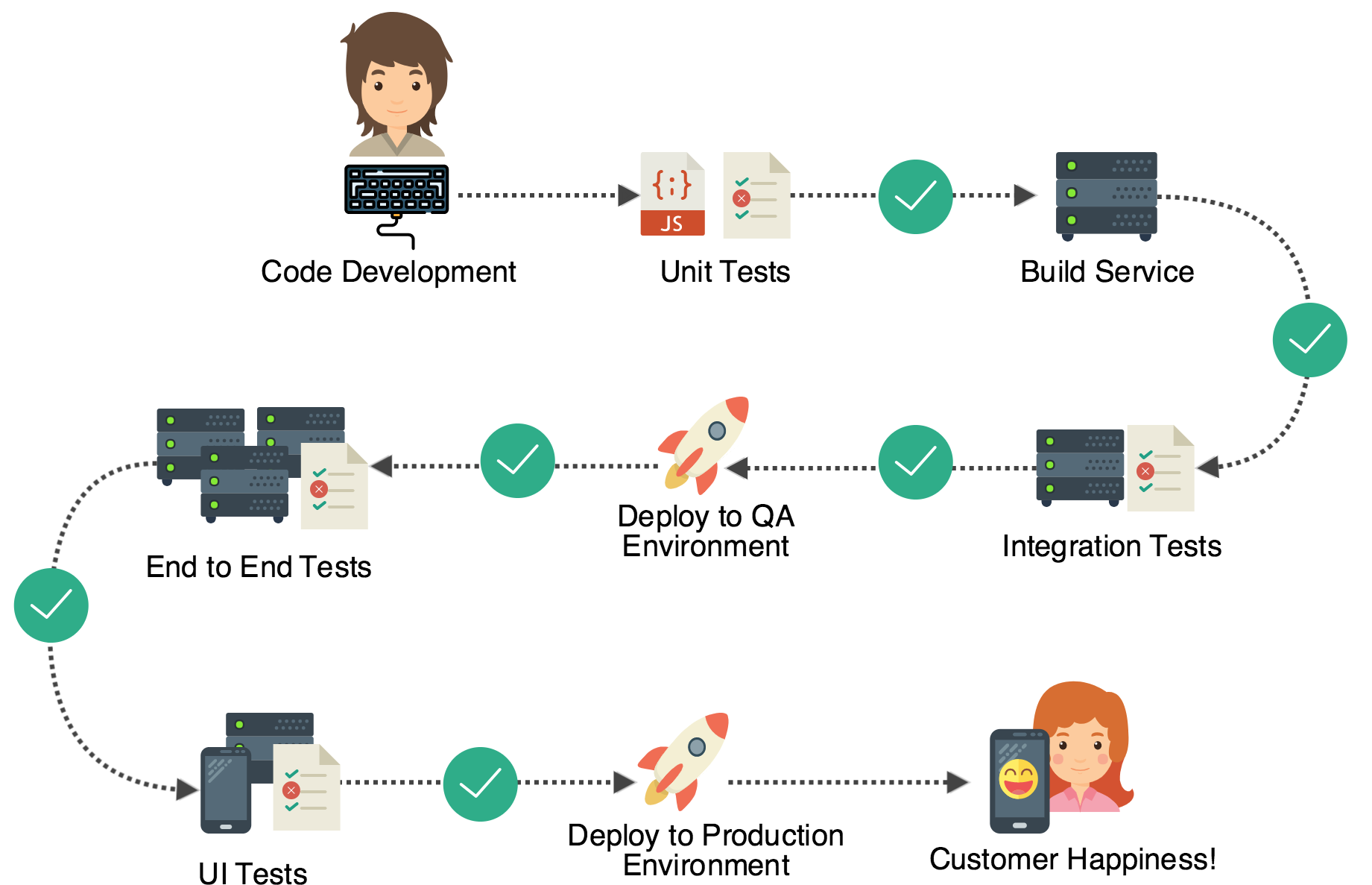 Engineers must have the right mindset when it comes to tests. They are often responsible for writing tests as well as the features, so they have a lot of control over the quality and effectiveness of tests. If testing isn’t taken seriously software engineers will create rudimentary tests that fail to exercise all the edge cases of the features, or they will be tempted to take shortcuts to get “coverage” with passing tests that don’t really test anything.

The goal of testing isn’t to make passing tests. The goal is to make consistent, high quality software that delights customers. Tests ensure that software quality starts out high and stays high as features are added or changes are made to existing features. This means that test failures need to be treated seriously. Tests can’t just be changed so that they pass. Any flaky tests that pass sometimes but fail other times need to be treated with extreme suspicion. If a bug is found in the product this means there is missing test coverage that needs to be filled. If engineers are aware of missing test coverage they need to ensure that they are given the time and/or resources to fix the issue.

The responsibility of creating a thorough testing culture doesn’t just lie with engineers. Product managers also need to be aware of the testing process and involved in it. If they are demanding that new features be built and released faster than engineers are able to develop good tests for those features then quality will suffer, and issues will start to make their way down the testing pipeline until they eventually reach customers and impact customer satisfaction.

Creating a thorough test framework for a distributed application requires that multiple layers of testing be employed. Quality assurance based on the client UI isn’t enough to catch all the types of bugs that may arise. Instead software engineers must develop a testing culture that incorporates automated testing into all aspects of the development and release pipeline. This includes writing unit tests for classes and functions, integration tests for services, end to end tests for entire systems, and UI tests to exercise both the client and the backend together.

The next article in this series elaborates on how to build effective unit tests.